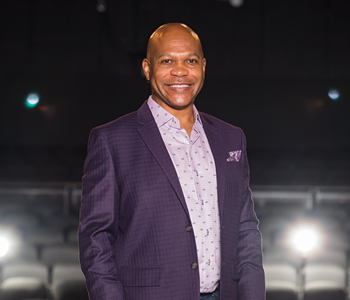 E. Patrick Johnson is dean of the School of Communication and the Annenberg University at Northwestern University. He is a 2020 inductee into the American Academy of Arts and Sciences. He has additional appointments in the Gender and Sexuality Studies and American Studies programs. A scholar/artist, Johnson performs nationally and internationally and has published widely in the areas of race, gender, sexuality, and performance. Johnson is a prolific performer and scholar, and an inspiring teacher, whose research and artistry has greatly impacted African American studies, performance studies, and gender and sexuality studies. He is the author, editor, or co-editor of several award-winning books, including his most recent two: Black. Queer. Southern. Women.—An Oral History (University of North Carolina Press, 2018) and Honeypot: Black Southern Women Who Love Women (Duke UP, 2019). He has received multiple awards for his scholarship, including the Lilla A. Heston Award, the Errol Hill Book Award, Hurston/Wright Legacy Book Finalist, Stonewall Book Award Honor Book, Lambda Literary LGBTQ Studies Book Award Finalist, the Randy Majors Memorial Award for Outstanding Contributions to LGBT Scholarship in Communication, Publishing Triangle Judy Grahn Award for Lesbian Nonfiction Finalist,  Lambda Literary LGBTQ Anthology Award Finalist. Johnson’s performance work dovetails with his written work. His staged reading, “Pouring Tea: Black Gay Men of the South Tell Their Tales,” is based on his book Sweet Tea and has toured at over 100 college campuses from 2006 to the present. His full-length stage play, Sweet Tea—The Play, premiered in Chicago and toured to Austin, Texas, Washington, D.C., New York, Los Angeles, Providence, R.I., Durham, N.C., and the National Black Theater Festival. Johnson has also received awards for his performance work, including the Leslie Irene Coger Award for Outstanding Contributions to Performance from the National Communication Association, the Bert Williams Award for Best Solo Performance from the Chicago Black Theater Alliance, and the René Castillo Otto Award for Political Theater. He is the star and co-executive producer (with John L. Jackson, Jr.) of the documentary Making Sweet Tea, which is based on the book and play. In 2010 he was inducted into the Chicago LGBT Hall of Fame. 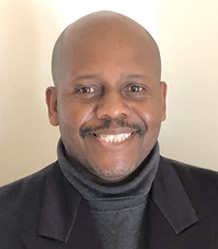 Kent R. Brooks (he/his/him) has dual roles at Northwestern University as the director of Religious and Spiritual Life, where he works within a team dedicated to creating an inclusive space supporting the quest for meaning and purpose, and as an assistant professor of instruction in the Department of Performance Studies, where his work focuses on the language, execution, and social/historical implications of Black Gospel Music. A seasoned church music director, worship leader, and educator, Kent is a BMI-affiliated composer who was twice the recipient of the Waljo Gospel Music Award. He was commissioned to compose and perform Heal the Land, the theme for the Raleigh-Durham area’s first observance of the Black Churches Week of Prayer for the Healing of AIDS. Another important commission had Kent assemble a 200-voice choir to perform Let Your Dreams Take Flight, the theme for the Special Olympics World Games. His composition Fanfare for Celina opened the inaugural International Igor Stravinsky Festival at The University of North Carolina at Chapel Hill, and his string quintet A Prelude for Spirituals debuted the same year. For four seasons, Kent performed with the Greensboro (North Carolina) Symphony Orchestra as chorus master and arranger for its annual community gospel concert. In his final year, the GSO performed Kent’s original gospel ballad You Are My Everything. This same piece was presented at the new music seminar of the 2009 Gospel Music Workshop of America (GMWA) in Cincinnati, Ohio. In 2013, his setting of Psalm 117 was recorded by mass choir of the GMWA. Kent debuted as a music director for the Springfield (Ohio) Arts Council for its 2013 summer presentation of Footloose: The Musical. To mark the 150th anniversary of the Civil War, he arranged an old battle song, Hoist Up The Flag, for a special concert performed by the Springfield Symphony Chorale and Orchestra. Before coming to Northwestern, Kent was the director of music and worship for High Street United Methodist Church in Springfield, Ohio, and he taught voice, conducted the Imani Gospel Choir, and served as chapel organist at Wittenberg University. He transcribes and arranges for the Gospel Music Workshop of America, the National Convention of Gospel Choirs and Choruses, and the Hampton University Church Music Conference. He is a former member of the Springfield Symphony Chorale and the Dayton Chapter of the GMWA, and he served on the board of the directors for the Springfield Symphony Orchestra. He has worked with many notables in the gospel, jazz, and classical fields, and his work as a producer, composer, and instrumentalist can be heard on various local, regional, and national recordings. Kent is a graduate of the University of North Carolina at Chapel Hill, where he studied music composition and music theory with Drs. Ingrid Arauco and Allen Anderson. He also studied classical piano, jazz piano, and voice with Dr. Linda Holtzer, Dr. Scott Warner, and Professor Stafford Wing, respectively. 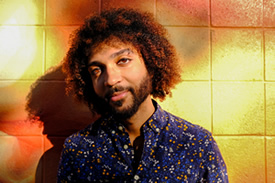 David Chavannes researches anti-colonial teaching methods and uses storytelling and sound performance to reflect on gender, sexuality, and immigration among Caribbean peoples. In the School of Communication, he teaches courses in sound studies and music theatre. He is committed to helping his communities become more equitable and empathic. David is developing two collaborative projects: a resource to help undergraduate and graduate music studies teachers practice anti-colonial pedagogies; and a podcast that historicizes contemporary debates in Jamaican politics, popular musics, and media. David’s dissertation narrates a speculative world through fragments of sound and text. From these fragments, listener-readers assemble a fictional future that illuminates colonial legacies in the contemporary Caribbean. David is expanding the project into a series of short stories accompanied by recorded performances. To encounter David’s work, please visit www.dchavannes.com 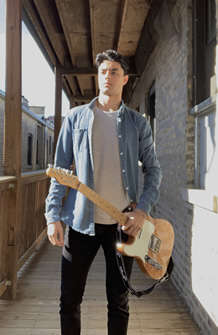 Shanth Gopalswamy first picked up the guitar at the age of 8, and like most early guitarists, was initially inspired by such guitar legends as Jimi Hendrix and Eddie Van Halen. He began his journey in jazz on the bass but soon decided to continue on with the guitar upon entering high school. During the next couple of years, Shanth was exposed to a wealth of opportunities through the SFJAZZ High School All-Stars as well as the California Jazz Conservatory, performing at such world-renowned music events as the Next Gen, Swing Central, and Monterrey Jazz Festivals. He was also lucky enough to travel around Brazil, performing with and learning from the greats, and record at Skywalker Ranch Studios. Shanth decided to continue his studies at Northwestern University where he is now a junior studying jazz guitar, cognitive science, and physics. In his time at Northwestern, Shanth has benefitted from learning under a fantastic set of musicians and mentors such as guitarist John Moulder, saxophonist Victor Goines, and trumpeter Joseph Clark among others. He looks to continue playing and recording with his local band. 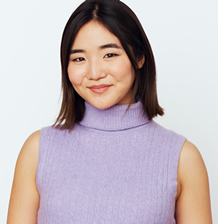 Claire Kwon is thrilled to be performing in this year’s CommCabaret! She is a senior at Northwestern studying theatre and international studies with certificates in musical theatre and integrated marketing communications. Her favorite Northwestern performing credits include: The Battlefields of Clara Barton (Clara*), Fun Home (Small Alison), the Waa-Mu Show—For The Record  (Lee Tai-young), The Wolves (#13), and Sense and Sensibility (Elinor). This winter, she is featured in the Virginia Wadsworth Wirtz Center for the Performing Arts’ production of The Ballad of Mu Lan. Favorite Film/TV credits include: Fraternal (Joy), Grief Night Club (Auggie), and Boba (Margot). She is also a proud member of THUNK A Cappella, Steam Heat Dance Company, and The Bix Musical Improv group. Claire is also a voiceover artist, pro home chef, and podcast enthusiast. 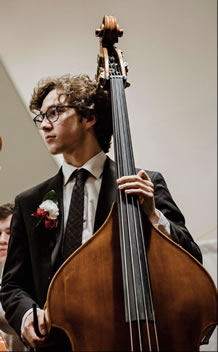 Jesse Lear began his music journey when he was exposed to the classical music of the Boston Symphony Orchestra and Boston Pops, for which multiple family members have played over the years. This carried into his high school years when he studied and performed at such classical music festivals as the Brevard Music Festival and Tanglewood Music Festival. During this time, he also performed throughout Western Europe with American Music Abroad. Jesse eventually decided to take his first major steps into jazz performance and composition, leading him to Northwestern. He is now a junior studying jazz bass performance and music technology with such highly acclaimed musicians as bassist Carlos Henriquez and tenor saxophonist/clarinetist Victor Goines. Over the last few years, Jesse has performed across the country as a jazz bassist—from the Dirty Dog Jazz Café to the 2020 Detroit Jazz Festival to NJPAC’s Prudential Hall. 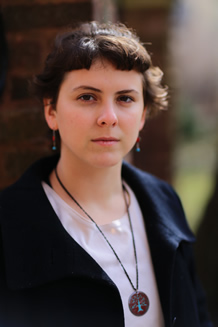 Lucy London (she/they) is a third-year Performance Studies major at Northwestern, born and raised on Coast Miwok territory colonially known as Petaluma, California. She has been trained in classical voice but loves to sing musical theatre and bluegrass. She spends most of her time doing climate justice organizing and spent last summer living on the frontlines of the Line 3 tar sands pipeline in so-called Northern Minnesota. She likes to play guitar and recently added mandolin and banjo to her queer folk rep. 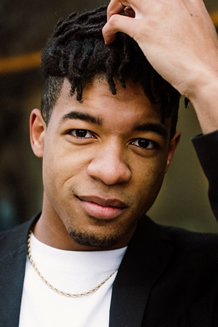 Jay Towns is a senior at Northwestern University studying musical theatre, music technology, and entrepreneurship. In addition to being a full-time student, Jay is also an actor, music artist, photographer, creative director, and video blogger. Jay’s recent credits include a guest appearance on Chicago P.D. (NBC), playing Jerome Jones in the new Indiana-based comedy TV series The Home, and playing Jamal Woodard in the Chicago-based musical film Good Enough: The Musical. When he’s not busy working on a project, Jay enjoys eating sushi and attempting to freestyle rap. @jaytowns 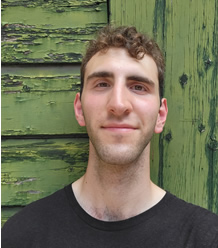 Daniel Zitomer is a drummer and songwriter from Westchester County, N.Y. Daniel has performed with various jazz, pop, and indie artists on the East Coast at venues including 54 Below, the Knitting Factory in Brooklyn, the Berlin, the Hudson Room, and the Jazz Forum to name a few. He studied at the Lagond Music School and the Berklee College of Music and is now proud to be an undergraduate at the Bienen School of Music at Northwestern University under the guidance of Victor Goines and Willie Jones III. In 2020, Daniel drove across the country and released an indie pop/rock album with his writing partner, Andrew Wholf, entitled “Mr. Strawberry,” which is available on all major streaming platforms. “Mr. Strawberry” was influenced by the music of Mac DeMarco, Her’s, and TV Girl, and infuses inspiration from Daniel’s and Andrew’s backgrounds in jazz.